Alphatrad, a linguistic and translation agency located at C/ del Sindicat, 67, 1a in Palma (07002), specialises in translations, interpreting and proofreading services, multilingual transcriptions, voice-over services and subtitling. Alphatrad belongs to the Optilingua International Group, which has subsidiaries in 12 European countries, and has over 40 years' experience in translation and linguistic services.

We also provide translation services for the other islands: Ibiza, Menorca and Formentera.

We offer an array of services in Spanish and other languages including:

If you need a translation from English to Spanish, French or any other language, Alphatrad Mallorca offers its proven high-quality services in over 100 languages and dialects, including:

Contact our professionals by email at baleares@alphatrad.com, where you can request a free, no-obligation quotation. 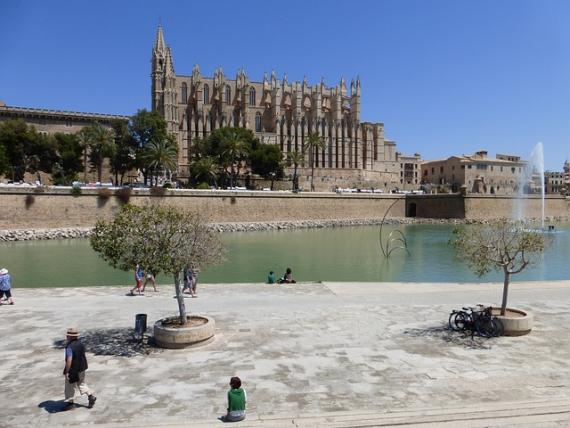 Palma is located in the centre of the bay that shares its name, at an altitude about 13 metres above sea level. With a population of over 400,000, Palma is the eighth largest city in Spain and the largest in the Balearic Islands. It was founded under the name Palma by the Roman consul Quintus Caecilius Metellus Balearicus in 123 B.C. After subsequent conquests by the Vandals and Moors in 903, it was finally conquered by King James I of Aragon, later to become the prosperous Ciutat de Mallorca and the capital of its own kingdom, which ended when it was annexed by the crown of Aragon in 1279.
Centuries later, in the 1960s and ’70s, the city would see a huge boom as a popular holiday destination. Today it is a major financial economic and cultural centre for both the island and the region as a whole.

A total of 77,330 foreign residents are recorded in the census, which at 19.5% of the city’s population is a higher proportion than the national average. The city’s foreign residents originate from many different countries and continents, although the German, Bulgarian, Italian, Moroccan, Argentinean, Bolivian and Colombian communities are the largest.
The two main driving forces of the local economy are tourism and construction, followed by industry and the primary sector (farming, fisheries and mining). The local hotel industries are among the most significant in Spain and even the world. The areas where the largest numbers of tourists are to be found are Playa de Palma and the city centre.
In Palma’s services sector, commercial distribution is particularly strong. Education, with the university as its flagship, is research-oriented. Healthcare facilities, particularly those provided at the local hospitals, meet the needs of the population of the metropolitan area, and the tourism sector includes an extensive network of hotels and restaurants of all sizes and categories. The city also has a large number of branches of all Spain’s leading banks.

Tourism is the main economic activity in Majorca as a whole and the city of Palma is no exception. Indeed, the whole regional economy depends directly or indirectly on tourism in the largest of the Balearic Islands. The predominant type of tourism found here is “sun and sand”, thanks to the appeal of the island’s many beaches and Mediterranean climate.
The official languages in Palma, as in the rest of the Balearic Islands region, are Catalan and Castilian Spanish. The most striking features of the Majorca dialect of Catalan (mallorquín) are the neutralisation of tonic a and e into [ə], and the use of the articles es, sa and ses instead of el, la, els and les. Because of the importance of tourism, many local people speak several European languages, mostly English and German and, to a lesser extent, Swedish, Norwegian and Italian.